Airlines Getting Greener and Flying Cleaner 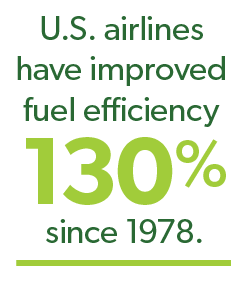 More people are flying than ever before. But while many passengers know that our fares have never been lower, most don’t know that our planes have never been greener. Commercial aviation contributes just 2 percent of the nation’s greenhouse gas emissions. Even so, U.S. airlines are continuously investing in more fuel-efficient aircraft and engines, developing sustainable alternative fuels, and implementing more efficient procedures – both in-flight and on the ground – to make our operations greener and our skies cleaner. 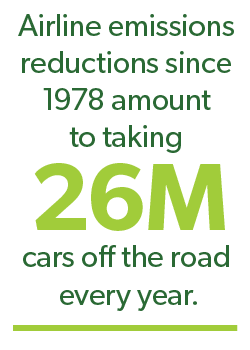 Since 1978, U.S. airlines have improved fuel efficiency by 130%, saving nearly 5 billion metric tons of CO2. That’s like taking 26 million cars off the road EVERY YEAR for the last 40 years! The U.S. airline industry transports 2.4 million passengers and 58,000 tons of cargo every day, while driving $1.5 trillion in annual economic activity and more than 10 million U.S. jobs. And in 2018, U.S. airlines carried 42 percent more passengers and cargo than in 2000, with just a 3 percent increase in total CO2 emissions, thanks to tremendous improvements in fuel efficiency. 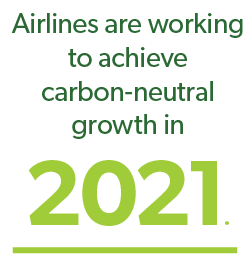 The airline industry is the only one in the world to voluntarily commit to an agreement to reduce and offset carbon emissions. The Carbon Offsetting and Reduction Scheme for International Aviation (CORSIA) calls for carbon-neutral growth in international commercial aviation beginning in 2021. And we’re not stopping there. The world’s airlines, including U.S. carriers, have set a goal of reducing CO2 emissions by 50 percent in 2050 as compared with 2005 levels. Simply put, the airline industry is the backbone of the world economy and a global leader in the fight against climate change.