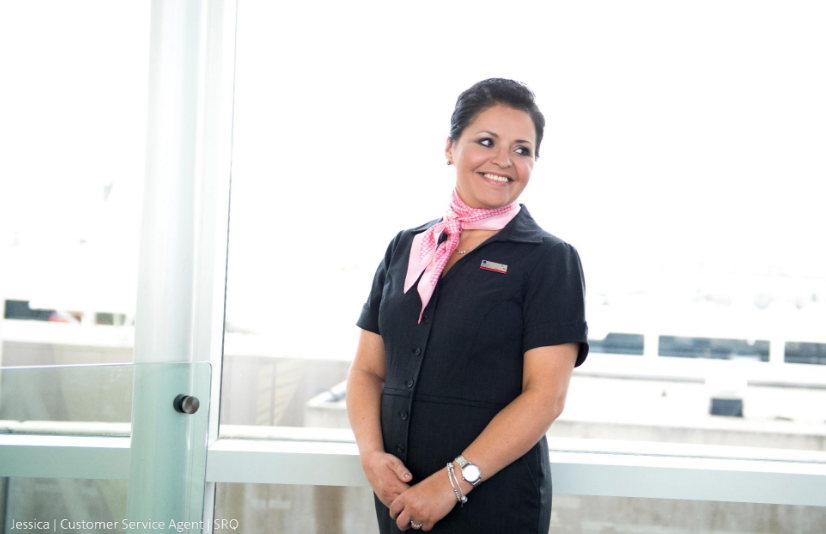 But did you know that the U.S. airlines are also huge supporters of breast cancer awareness and research?

One in eight U.S. women will be diagnosed with invasive breast cancer in her lifetime. But with early detection and proper care, women (and men) can and are beating breast cancer.  That’s why airlines are committed to supporting and educating people about this important cause.

American Airlines’ Nonstop Fight program kicks into full-gear during the month of October with the “Be Pink” campaign. AAdvantage members can earn extra miles with a donation to Susan G. Komen, which raises funds to support breast cancer research. American is supporting Komen, which has the bold goal of reducing breast cancer deaths by 50 percent over the next 10 years.

This month we admire the strength and courage of our #AATeam as they continue their #NonstopFight. Read more: https://t.co/SlDVNCLQ4z pic.twitter.com/S9TfahLvHI

To show their pink spirit, Alaska Air commissioned their uniform partner, Luly Yang Couture, to design unique “Ribbons in Flight” accessories for their employees to show their support and promote education.

In the sky and on the ground, our teams proudly support #BreastCancerAwareness month with @LulyYangCouture designed “Ribbons in Flight” pic.twitter.com/Y8gkEW56Wh

To honor women affected by breast cancer, Hawaiian Airlines partnered with the Coordinates Collection to develop beautiful custom bracelets, available for purchase on their online store. The coordinates of the Hawaiian Islands are stamped on the outside of the bracelet, while the inside is marked, ‘Onipa’a, which means “Stand strong.” All proceeds from the bracelet directly benefit breast cancer research.

We’ve partnered w/ Coordinates to create these bracelets & portion of the proceeds will go to fight #breastcancer https://t.co/cBt9WaHfdz pic.twitter.com/bzNP7lqcSR

Southwest Airlines is also committed to the fight against breast cancer, through its Medical Transportation Grant Program, which provides complimentary round-trip tickets to nonprofit hospitals and medical transportation organizations. Recently, Southwest honored a special passenger aboard one of its flights by lighting the plane in pink. Diane, a 16-year breast cancer survivor, celebrated breast cancer awareness month with the entire plane.

October 6 was very, very special. My crew (Danielle, Vickie, and Tami) and I got to meet Diane! Diane is a two-time breast cancer survivor. She’s now been cancer free for 16 years! It was so inspiring to hear her story. She was in the best of spirits the entire flight, and she was an absolute joy to…

But women aren’t the only victims of this disease. FedEx recently shared the story of its pilot Mac Holmes, who was diagnosed with breast cancer in 2012. Although more rare among men, Mac encourages men to monitor their chests for lumps as well.

A Man with a Mammogram: Pilot Shares Struggle with Breast Cancer

You have cancer. Per the National Cancer Institute, nearly 40% of men and women will hear those words at some point during their lifetimes. Mac Holmes first heard it in 2012. It was what came next that shocked him the most. “My doctor told me I had to go get a mammogram,” said Mac, a FedEx pilot.

With increased awareness and research, U.S. airlines are doing their part to help make breast cancer a thing of the past. To learn more about breast cancer and how you can lower your risk, visit CDC.gov.