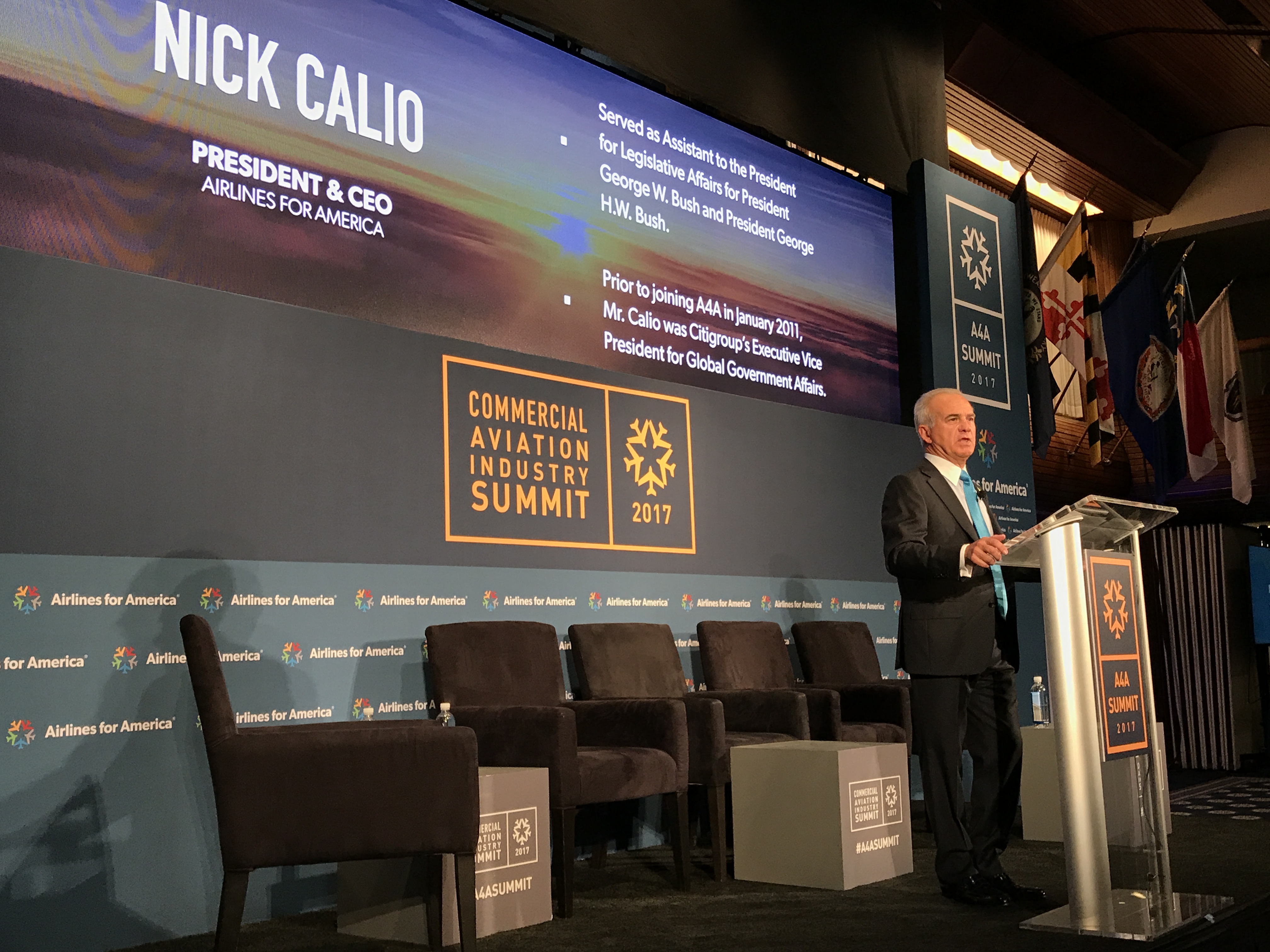 On Sept. 13, Airlines for America hosted its fifth annual Commercial Aviation Industry Summit in Washington, DC. Panelists included industry experts, economic analysts and airline executives, including CEOs from the leading U.S. airlines, to discuss advancements in the industry, economic trends and legislation vital to continuing the airline industry’s tradition of safety and efficiency.

To kick off the afternoon, DJ Gribbin, special assistant to the President for infrastructure policy, delivered a keynote address that focused on the importance of the airline industry to the American economy and what we can do to make sure it continues to move forward.

“We’ve all been there and frustrated with the timing of flying. ATC reform is not going to fix this problem, but the President thinks it’s the most important thing we can do to take a step in the right direction. We need to start somewhere. Reforming the air traffic control system is the right place to start.”

“ATC is not unsafe, but it’s probably at capacity,” said Flynn. “I think, without ATC modernization, there’s going to be increasing pressure and competition for that valuable space. Airspace and, of course, on the ground.”

“Convincing someone that, ‘Gosh, your flight would be there three minutes sooner,’ doesn’t sound like that big of a benefit, but it’s enormous,” Parker said. “More importantly, what you would see as a consumer is the ability to fly to more places, you’d be able to get there more quickly, and it’s just so obvious, the technology we’re using.”

“After 35 years in private business, I’ve owned a number of GA aircraft,” said Congressman Mitchell. “I experienced the air traffic control issues we had…A number of airports and airspace are closed routinely. And, there’s no backup on that. This bill addresses that, along with a series of other concerns which we can talk about more in questions.”

For a look at how both passenger and cargo carriers connect the world, panelists Sean Kennedy (Airlines for America), José A. Freig (American Airlines), Brent Cagle (Charlotte Douglas International Airport) and Captain Houston Mills (UPS) joined Karen Walker for a discussion on safety and the challenges and opportunities airlines face around the world in Connecting Our Global Skies.

“The industry is huge fans of Global Entry, PreCheck…But, as you look at new technology, one of the things that we’re challenged with is just getting some of this new technology out there quick enough from a testing perspective,” said Freig. “We believe the security process should be embedded in the customer experience, but we also understand that we have to have some of those checkpoints and the idea behind it, of course, is to vet customers properly and that we feel that the technology that’s there is sufficed to keep our customers and our team members safe.”

“One thing that we know is that we, as an airline industry, and the US in particular, we operate the most complex but safest aviation infrastructure in the world. As this new technology emerges, it’s obviously very important that we don’t compromise those safety and security standards,” said Mills. “We have the privilege of partnering with a company called Zipline in talks about what drones can do good. We’re taking them to the government of Rwanda and GAVI, who’s the world’s largest immunization provider and providing a fully autonomous delivery network for blood to hospitals and saving lives today…There’s a lot of good that can be done, so there’s got to be some type of balanced approach and a safety based approach to make it happen.” said Mills.

For the final keynote address of the day, Chairman and CEO of Alaska Airlines, Brad Tilden, reiterated the arguments made throughout the day on air traffic control reform, citing his own experience as a pilot.

“At the current course and speed, our delays and congestion…will get worse and worse and worse, because demand for air travel is growing more rapidly than the rollout of technology. The technology has existed for 21 years. This is not a technology conversation. It’s a conversation about creating a funding model and a governance model where speed and innovation are prized.” Tilden said. “Incremental changes haven’t gotten us to where we need to get, and they’re not going to get us there. What we need is transformational change.”

“We can do this. We can make this work for both commercial and general aviation. We’re asking congress to act. Speaking as a GA pilot myself, I personally believe this will benefit the non-commercial segments of the industry as well.”

“Southwest is an investment grade credit and has been for decades. We want to maintain that financial health, and these are all important considerations,” Kelly commented. “It’s a healthy environment today. The economy is growing enough. The industry is also able to grow. The challenge, to me, for the industry, is making sure that we have the capacity in the air and the capacity on the ground to be able to support that kind of travel demand growth in the future.”

“I think we’re in a really interesting time in our business. There’s still some of the shakeout going on, but we’re in a position now to really do a great job of taking care of our customers, taking care of our team members in a way that we’ve never been able to do in the past. And that’s really exciting,” Parker said. “I’m looking forward to being here in a few years and talking to you about the things that we’ve changed and how much better it is. Because I know it’s going to happen.”

To watch the 2017 Commercial Aviation Industry Summit in its entirety and to learn more about each panelist, visit summit.airlines.org.