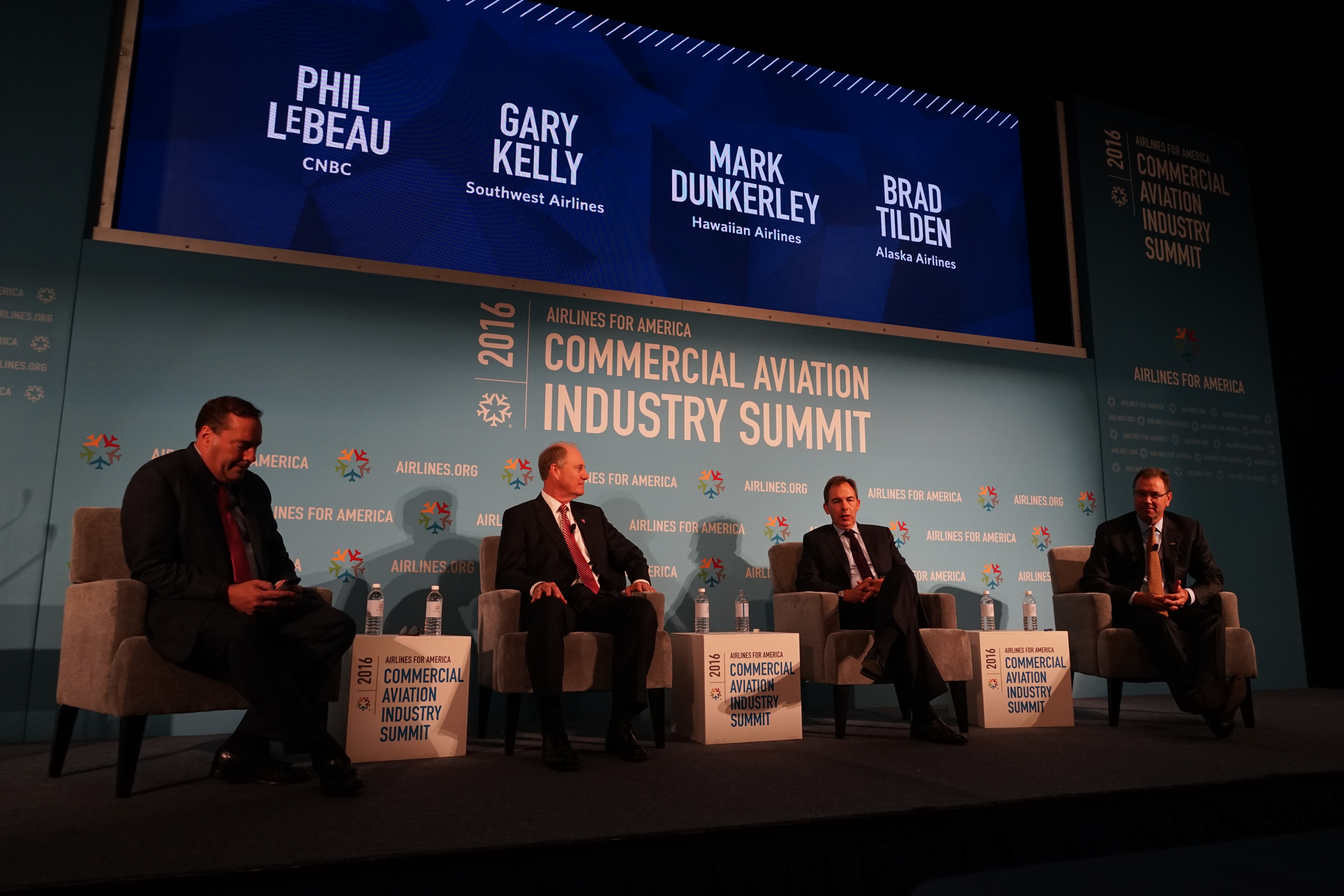 To kick off the afternoon, Holly Hegeman, founder and Editor-in-Chief of PlaneBusiness Banter, delivered a keynote address that touched on the modernization of the airline industry, and how airlines can “create the change in disruption” to continue to move forward in this exciting period of air travel.

This theme of looking forward to the future and constantly improving the air travel experience carried on throughout the day, particularly into the Aviation Innovation Panel, where Bart Jansen (USA Today) moderated a discussion on the latest and greatest in the industry between Chris Williams (UPS), Marty St. George (JetBlue Airways) and Joseph Sprague (Alaska Airlines). Known for their respective companies’ innovations, the panel touched on a number of exciting advancements coming to the industry, including JetBlue’s program to expand free broadband Wi-Fi to every plane by December and Alaska Air’s on-board menu that provides passengers with top quality, locally sourced, delicious food.

“Over the last five years, Alaska Airlines has spent a hundred million dollars on investments specifically to our onboard product. And that doesn’t count the significant investment we’ve made of course in new aircraft,” said Joseph Sprague, Senior Vice President of Communications and External Affairs. “Even the hard product is an opportunity for innovation as well, and that’s why we are really proud to be the launch customer with Boeing for the new space bins, which is really going to revitalize and transform how carry-on bags are accommodated onboard the aircraft.”

Always one of the most popular panels, the View from the Street highlighted how these massive investments in the passenger experience will affect airline financial health and profitability moving forward.

“As a customer I love it. You know, I want the product to be just as good as everybody else,” said Kristopher Kelley, the Assistant Portfolio Manager from Janus Capital. “But at the end of the day every investment they make, they have to at least earn their cost to capital. That’s capitalism.”

Following this spring’s exceptionally long TSA lines, Gary Kelly, President and CEO of Southwest Airlines; TSA Administrator Peter Neffenger and Paul Donahue, President and CEO of Centerra Group, discussed the airlines’ partnership with the TSA to improve the screening process and the state of security in our nation’s airports.

“You have to understand that the TSA is integral to the effective and efficient operation of the system. It needs to transform. It needs to modernize,” said Administrator Neffenger. “You have to think about a way to sustain that into the future. And it’s more than just wait times, it’s a security issue.”

Perhaps one of the most important aspects to ensuring the U.S. airline industry continues to advance is air traffic control (ATC) reform. The ATC Panel discussed the need for the United States to catch up with other countries and the challenges ahead if we don’t implement a more advanced system in a technology-driven world.

“I have a second job and that is teaching the aviation merit badge to boy scouts,” said JetBlue CEO Robin Hayes. “You teach the four forces of flight and then you have to do a field trip. So, I thought, you know what, I’ll take them to a tower.

“We go up to the tower…And there are the strips of paper and there is a green screen television hanging down from the ceiling. It had probably been up there for fifty years. These kids had never seen this technology before. How can we inspire a new generation to do this amazing, important work of controlling the nation’s air traffic control system when they open the elevator and they see that sort of technology? Not one single scout left there inspired to be an air traffic controller.”

Doug Parker, Chairman and CEO of American Airlines, reiterated these points during his keynote address, adding that, “For airlines, the air traffic control system is, in effect, our production line. The quality and efficiency of our product is dependent upon how well this production line works. So, we have a huge stake in a strong ATC system.

“If we can accelerate the pace of moving to next generation air traffic control, we can increase margins of safety sooner; reduce delays, lower carbon emissions, open up more capacity for competition, provide a stable working environment for the agency’s employees and improve service to the travelling public,” Parker said.

To wrap up the program, the final panel, featuring airline CEOs Gary Kelly of Southwest, Mark Dunkerley of Hawaiian Airlines, and Brad Tilden of Alaska Airlines, touched on the themes throughout the day, voicing their opinions on customer satisfaction, employee wages and benefits and their individual airline IT systems.

“The on-time performance is much better than it was a few years ago. The vast majority of people that fly with us today, with all of our airlines, are satisfied. They are getting a great experience. Fares are much, much lower. The fares, basically, in real terms, they move a little bit around with fuel prices, but they’ve gone down for thirty years. And airfare in real terms is half of what it cost thirty years ago,” Tilden said. “I think it’s hard to make a case against this industry right now.”

To watch the 2016 Commercial Aviation Summit in its entirety and to learn more about each panelist, visit http://summit.airlines.org/.